Cesare De Bus, the holy catechist founder of the Doctrinaries

Previous Next
Cesare De Bus, the holy catechist founder of the Doctrinaries

Interview with Father Sergio La Pegna, Superior General of the Congregation of the Fathers of Christian Doctrine 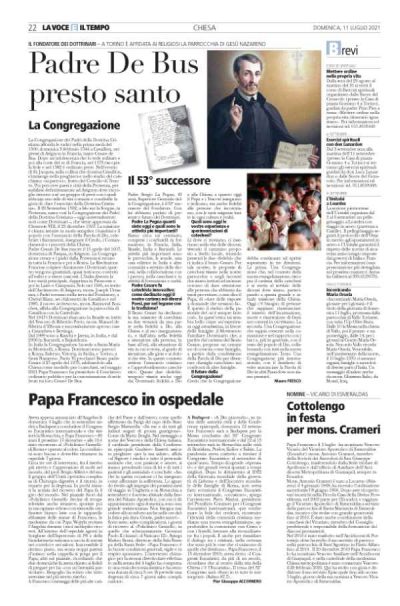 The Congregation of the Fathers of Christian Doctrine has its roots in the first half of 1500: on Sunday 3 February 1544 in Cavaillon, near Avignon in France, Cesare de Bus was born.
After an adolescence that saw him in the military and then at the court of the king of France, in 1575 he rediscovered the faith and in 1582 he was ordained a priest. In the hermitage of St. Jacques, on the hill overlooking Cavaillon, he immerses himself in prayer and in the study of catechism “for parish priests”, the fruit of the Council of Trent. Then he travels through towns and cities of Provence, to settle permanently in Avignon where he gathers around him a group of priests with whom he sketches a common lifestyle and shares the joy of “practicing the Christian Doctrine”. Thus, on 29 September 1592, in Isle sur la Sorgue, in Provence, the Congregation of the Fathers of Christian Doctrine – now universally known as Doctrinaires – was born, which was approved by Clement VIII, on 23 December 1597. The mission is clear: to instruct in children and the people in a simple way with the proclamation of the Word of God, celebrate the Sacraments, teach the Creed, the Commandments and the precepts of the Church.

Father Cesare De Bus died on April 15, 1607, Easter Sunday, in Avignon. The Congregation grows and the fathers from Provence go to all of France and then to Rome. The French Revolution hits the Doctrinaries hard; four are executed, almost all are forced into exile and to live in hiding. Italy becomes their main half, first in Piedmont and then in Lazio and Campania. Only in 1966, at the invitation of the Archbishop of Avignon, Msgr. Joseph Urtassun, the Fathers return to the land of the Founder, to Cheval Blanc, six kilometers from Cavaillon and in 1985, the new archbishop, Msgr. Raymond Bouchex, entrusts the parish of Cavaillon with the Cathedral to the Congregation.

In 1947 the Doctrinaries landed in Brazil at the invitation of the Bishop of Ribeirão Preto, Msgr. Manuel de Silveira d’Elboux and subsequently opened houses in Catanduva and Bertiuga.
Since 1999 they are in Ranchi and Jareya, India, and since 2006 in Burundi, in Bujumbura. In Italy the Congregation has its headquarters in Santa Maria in Monticelli, in Rome. Doctrinaries are parish priests in Rome, Salerno, Vittoria, in Sicily, and Turin, to Gesù Nazareno.

Paul VI proclaimed Father Cesare Blessed on April 27, 1975, pointing to the Church as a model for catechists, in May 2021 Pope Francis presided over the ordinary public consistory for the canonization of seven blessed among them Cesare De Bus.

Father Sergio La Pegna, 49, Superior General of the Congregation, is the 53rd successor of the Founder. We talked with him about the present and future of the Doctrinaries.

Father La Pegna how many are you today and what are the most important activities?
We are about a hundred, including confreres in formation, in France, Italy, Brazil, India and Burundi. The most important activities are parishes, schools, a publishing house in Italy and other communities at the service of the dioceses, in collaboration with parish priests, in catechesis and in training and charity activities.

Father Cesare was an innovative catechist: how do you interpret your charism today in the various countries, despite the link with tradition?
Blessed Caesar declined his mission as catechist on two fronts: on the one hand in fidelity to God, to the Church and to his teaching, and on the other in fidelity and attention to the person, based on age, life situation in which he is, the degree of education, the joys and sorrows he experiences. In this context, the Christian proclamation and catechetical study take place. These two “fidelities” are also lived today by Doctrinaries: fidelity to God and to the Church, to what the Pope and the Bishops teach and indicate today, but also fidelity to the people we meet, with the various needs inherent in every culture and reality.

What are your experiences and experiments in catechesis today?
Where we are, we insert ourselves into the life of the dioceses, living the path proposed at the local level, bearing in mind the two “loyalties” that Blessed Caesar indicates to us. For this reason, the proposals for catechesis lived in our parishes or in the meetings that we are invited to animate try to give attention to the people in front of us to avoid, as the Pope says, “giving answers to questions that no one asks”. This is the risk of the pastoral care of “it has always been done this way”. From this point of view it seems nice to cite a very current experience today, in favor of families: the Doctrinary Family Movement which, starting from the charism of Blessed Caesar, proposes a path of growth as families, starting from sharing the Word of God for to become “catechist families” towards other families.

What future for the Congregation?
I believe that the Congregation must continue to open up above all in three directions. The first. A Congregation which, in the context of the new evangelization, rediscovers the charism of catechesis and puts itself at the service of the dioceses where we are, participating in this great and current mission of the Church. Today we need people who know how to announce the mystery of the incarnation, death and resurrection of Jesus in the contexts in which we live. The second. A Congregation that knows how to grow in communion and in relations with the laity and, more generally, with the rest of the people of God, collaborating with everyone in the new evangelization. Third. A more international Congregation, with the desire to want to announce the Word of God in other countries where we are not present.