In the storm of the French Revolution

At the outbreak of the French Revolution in 1789, the Congregation numbered about sixty houses in France and about thirty in Italy and was divided into Provinces: Avignon, the cradle and spiritual center, made up of twenty-seven communities; Toulouse, eighteen communities; Paris, seven communities; La Flèche, whose exact number is unknown since it was a Province in formation; Rome and Naples.
In France, many Fathers devoted themselves to sacred eloquence, following in the footsteps of Father Audifret. At the same time theology found its devotees in Fathers Le Semelier, Annat, Besombes, Suret, Laroque, Beuf, Gochon, Camblat, while Fathers Boleran, Grenan, Baizé, Louvreleul and Vanin distinguished themselves in letters and teaching. Father Vanin was the first to devote himself to the instruction and education of the deaf and dumb, adopting a method involving the support of images.
Father Laboysiére was a preacher at the court of Louis XVI, Father Corbin was tutor to the heir to the throne, Father Bonnefoux directed the Charity Institute in Paris, Father Le Semelier taught theology in Paris and was the author of moral lectures, which were printed in twenty-two volumes. Father Iard preaches Lent four times in Paris and leaves five volumes of meditations on the Gospels and Epistles of the year; Father Clombe is professor of Theology at St. Charles and publishes the Institutiones Theologicae in ten volumes. The Doctrinaires Richard, Dirivier, and Domergue are distinguished for literary and grammatical criticism; Father Laromiguiére is a distinguished scientist.
The impetuous wind of the Revolution also hit the Congregation. In 1790 all religious guilds were dissolved, but enforcement of the ordinance remained suspended for Congregations dedicated to the education of youth. Thus the Doctrinaries survived until August 1792, when all Orders and Congregations were finally abolished.
When the revolutionaries arrived, Father Claudius Bochot, superior, and Father Eustace Felix, bursar, refused to sign the “Civil Constitution of the Clergy”, were arrested and taken to the Seminary of San Firmino, which was transformed into a prison.
The Brief of the beatification of Fathers Claudius Bochot and Eustace Felix reports that they were killed inside the house, or thrown from the window onto the street, where fierce women rushed on the priests to beat them to a pulp with sticks; not content with that, they climbed on the carts, where the bodies were deposited and trampled them, cut them into pieces and showed, with pride, the limbs to passers-by shouting “Long live the Nation”.
Another Doctrinarian , Father Joseph Raoulx refuses to take the oath for the “Civil Constitution of the Clergy” and is imprisoned in the San Lazzaro prison. Condemned to death on July 25, 1794, he asked to be killed last in order to give absolution to his companions: he was guillotined the same day.
Other Doctrinarians, rather than take the civil oath of the clergy, preferred to flee, going to Rome where Father Royer, Procurator General, and the other brethren welcomed them lovingly, placing them in various houses in the Roman Province. Other Doctrinarians took refuge in Ravenna, Ferrara and Bologna. Still others took refuge in Switzerland, Belgium and England.
Some Doctrinarians , however, gave in and signed the “Civil Constitution of the Clergy”.

Elected at the Paris Chapter of 1776, confirmed in 1782 and reconfirmed in 1788, never was any Superior General like Father Bonnefoux to have fought and suffered so much for the Congregation. Father Bonnefoux contributed effectively to the mission of the Congregation, giving a strong impetus to teaching, opening new colleges and bringing the Congregation to the highest degree of development and prosperity. From 1710 he opened the colleges of Bedarides, Vence, Senez, Miramont, Barcellonette, Lodève, Nant in Rouergue, Sospello, Castelnoudary, Moissac, Tarbes, Acqs, Bellac, Avallon, Vitry-le-François, Châlon-en-Champagne, Troyes, and Trégnac, a third house in Paris, the college of Esquiline in Toulouse, with a school complex including all orders of studies from elementary to the faculties of Theology and Philosophy, the college and seminary of Mende and the seminary of Nîmes. Later, the houses of Carpentras, Carcassonne, La Flèche, Bordeaux, Saint Omer, Montpellier, Montauban, Orange, Avignon, Aix, Condom, Gap and others were added.
During the French Revolution he refuses to take the oath to the Civil Constitution of the Clergy and with great sorrow sees two hundred years of work and sacrifices of so many brothers go up in smoke for the hatred that is unleashed against the Catholic religion. He died in 1806 in the Foundation of Abbot Sicard in Paris and with him ended the presence of the Congregation in France, the land of the founder César De Bus.

The return to the land of the founder

The first attempt to re-establish the Congregation in France dates back to 1850, but it was not until more than a century later. In 1966, at the invitation of the Archbishop of Avignon, Monsignor Joseph Urtassun, the Fathers returned to the land of the Founder, in Cheval Blanc, six kilometers from Cavaillon. Father Battista Previtali and another confrere began a humble and significant presence, and they were joined by Father Francesco Balzola, who had returned from Brazil.
In 1985, the new Archbishop of Avignon, Monsignor Raymond Bouchex, entrusted the parish of Cavaillon to the Congregation, with the Cathedral, so beloved by the Founder. Father Battista Previtali is named pastor, along with Father Giambattista Carnevale Garè and Father Adair Diniz, from Brazil. Many other confreres have since committed themselves to service not only in the parish of Cavaillon, but also in the Diocese of Avignon. In particular Father Giorgio Levorato, Father Franco Mangili and Father Vincenzo De Martino. 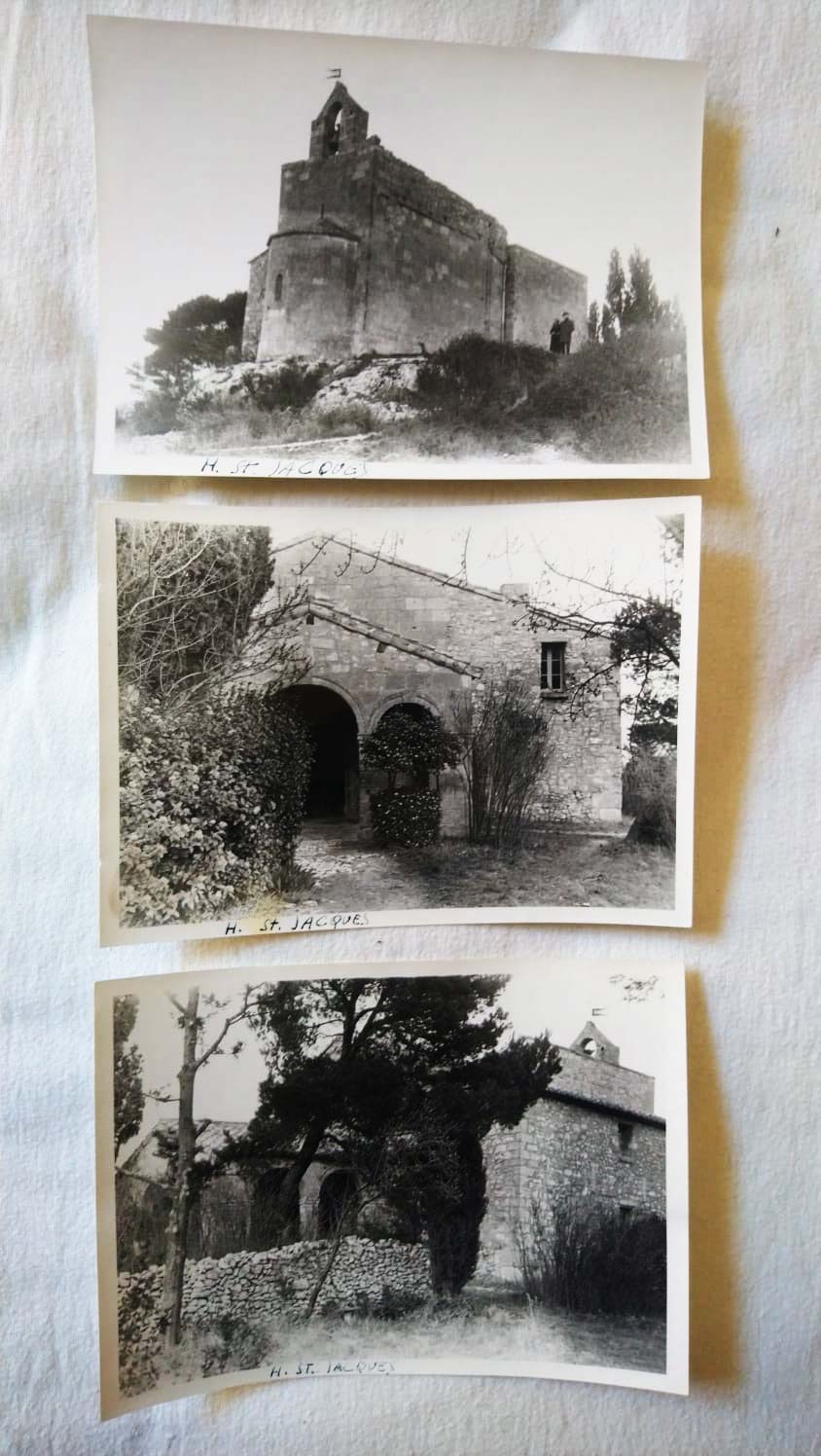 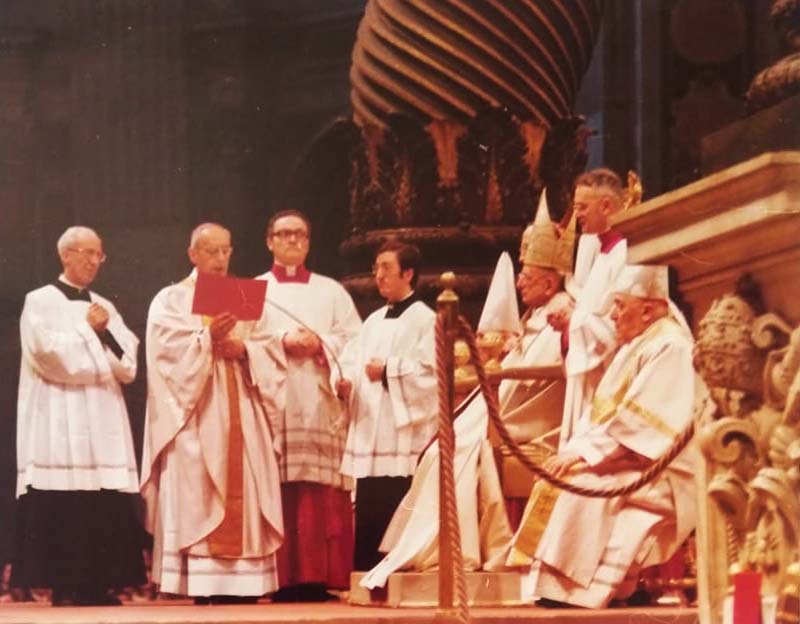 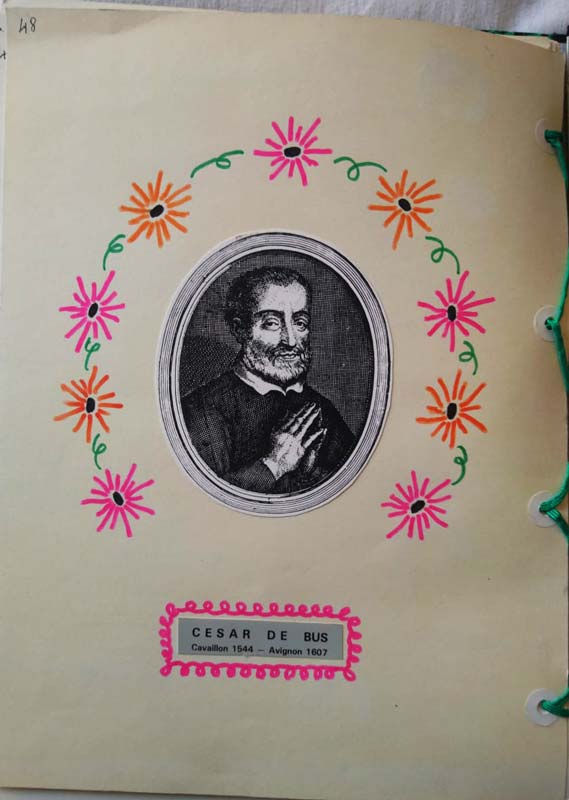 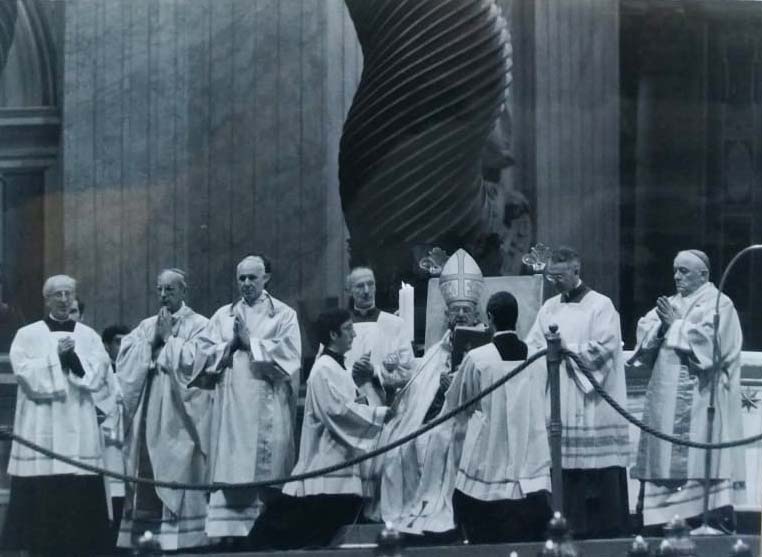 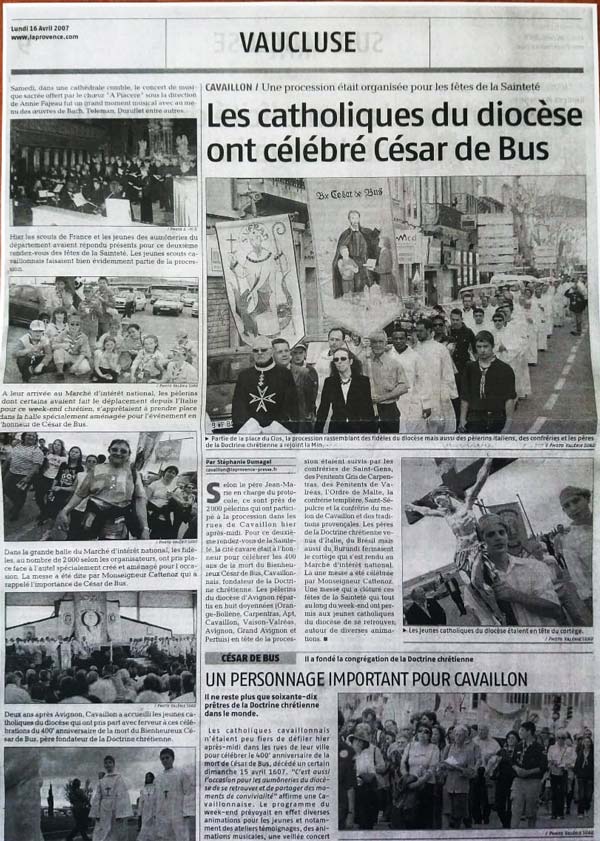