The Process of Canonization of Blessed César De Bus 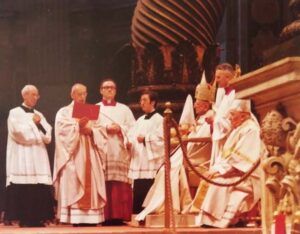 The two miracles that occurred through the intercession of Fr. César , recognized by the Congregation for the Causes of Saints, with instantaneous, perfect and lasting healings were those of Pasquale Savino, suffering from acute pulmonary syndrome, combined with cardio-respiratory insufficiency, and of Maria Bianco, struck by a thyroid tumor that, having manifested itself suddenly, developed rapidly. The two miracles occurred respectively in Ascoli Satriano and in San Damiano d’Asti.
In preparation for the beatification, from July 10 to 15, 1974, at the Generalate, the canonical recognition of Fr. Cesare’s remains was carried out by a doctor, in the presence of representatives of the Congregation for the Causes of Saints, the Superior General, and some confreres. This was the fourth canonical recognition, after those of 1608 and 1836 in France, and 1924 in Rome.
On April 27, 1975, Father Cesare was proclaimed Blessed in St. Peter’s Basilica.

Among the many graces attributed to the intercession of Blessed Cesare de Bus, the Congregation for the Causes of Saints examined the case of the successful recovery of a young woman from Salerno suffering from “severe Acinetobacter Baumannii MDR meningitis in a patient with previous intraparenchymal cerebral hemorrhage,” which occurred in 2016. While the young woman was in a serious clinical situation due to a large cerebral hemorrhage, which occurred on October 17, 2016, suddenly, on the following November 9, she was struck by a bacterial meningitis, which compromised even more the clinical picture, which was already severely tested. Only after three days, the health situation improved enormously and, on November 30, the young woman was discharged from the hospital completely cured of meningitis. The initiative to entrust the young girl to the intercession of Blessed Cesare was started in the parish of Santa Maria dei Barbuti, entrusted to the Doctors. Informed by friends, our confreres immediately sent to family members, relatives and other acquaintances the little image of the Blessed with a prayer for healing and a relic of the Blessed. Daily invocations to the Blessed began so that he would intercede for the young woman’s recovery. Prayer vigils were organized and many parishioners joined in. Relatives and friends prayed in the hospital, in the hall in front of the Intensive Care Unit.
On May 26, 2020, Holy Father Francis authorized the Congregation for the Causes of Saints to promulgate the decree on the miracle.