The spirituality of the Founder 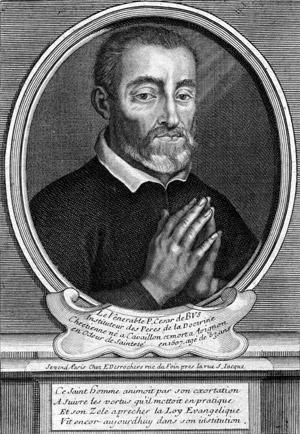 From his own experience, César found five pillars to build his relationship with the Lord: love for Sacred Scripture, Eucharistic Adoration, devotion to Mary, invocation of the Angels and Saints and spiritual accompaniment.

Holy Scriptures
César was nourished by the Holy Scriptures and made them the object of his meditation and contemplation. In all the works attributed to him we find many biblical quotations. For him, ‘listening to the Word’ means understanding it, loving it, believing in what it proclaims and putting it into practice; in it one finds the strength and courage to live the earthly pilgrimage. The Word of God first questions the one who proclaims it, so that he too may draw fruit from it for his own spiritual growth. The Brief of Beatification issued by Paul VI states: “The ministry of the word, that is, the whole Christian institution, is nourished by the Holy Scripture (DV 24). This assertion of the Second Vatican Council admirably explains the zeal and apostolic method of the Servant of God César de Bus, founder of the Congregation of Christian Doctrine’s Priests who confort the mind with a daily supply of the Holy Bible”.

Eucharistic Adoration
César maintained a great devotion to the Blessed Sacrament. He affirmed that he would have preferred to suffer the loss of the dearest thing rather than miss the Mass celebration even once. Father César also manifested his love for the Eucharist in Adoration. At the beginning of his priesthood, he retired for about two years to a small hermitage Saint Jacques, on a hill overlooking Cavaillon. Here, by his own hand, he opened a small window through which, he could contemplate the Blessed Sacrament in the Tabernacle.

Devotion to Mary
César in his autobiography states that he received this devotion from the Lord since he was a boy, particularly towards the Immaculate Virgin. Mary, is seen as the Mother of mercy, who intercedes for us pilgrims on earth and in constant need of God’s forgiveness. She is the Mother who, at the foot of the Cross, suffered more than anyone else, the passion of her beloved Son. Mary is mostly venerated with the recitation of the Rosary.

The invocation of the Angels and Saints
César also had a great veneration for the angels and saints. He wanted every hour of the day under the protection of a saint and invoked all them with various prayers. Being a catechist and announcer of the Word of God means being an angel of light. Christian Doctrine is the light that illuminates all men and gives them joy, serenity and hope. By proclaiming the Doctrine, catechists become messengers of this light which is spread both by words and by the testimony of life. In his spiritual testament, he recommends the friendship of a saint: “Choose a saint among all, imitate him and often read his life.. Pray him every day so that he may communicate his spirit and holiness to you. Try to courageously follow his holy footsteps so that, you may have the same desire to go to heaven.”

Spiritual accompaniment
In the “sequela Christi”, Father César put himself under the guide of other people, showing them his own feelings, his difficulties and his joys. His first two spiritual guides were two laymen: Antoinette Reveillade, a simple and illiterate woman, and Louis Guyot, sacristan of the Cavaillon Cathedral. Later he was referred to the Jesuit Father Pequet, who accompained him in his spiritual exercises. The Jesuit father also followed him in his studies, deciding to give him lessons: After his morning meditation, César had to write down in French the feelings, inspirations and inner lights that God had communicated, then he had to translate from French to Latin what he had written and had to give his work to his confessor; he would then obtain two results: the correction of any lexical mistakes and the constant progress in his spiritual life.

The care and love of César de Bus for the “little ones” (in the evangelical sense) was marked by a new pedagogical method in which he gradually involved priests and laity, with the intention of “doing catechism together“, in unity of method and spirit.

His innovative methodology, and the means he devised made his catechesis attractive and easy to understand. He made use of simple and effective tools such as: tablets with evangelical scenes painted by himself, previews of the audios songs and poems.

With simple, immediate and familiar language, he made abundant use of the Word of God, applying it to concrete concepts and situations. Through his catechesis, he aimed to induce his listeners to be “good Christians”, not only in their words, but also in their behavior, leading them, through a sincere conversion, to Jesus. César, knew that the “Catechism for Parish Priests”, desired by the Council of Trent, was an instrument only accessible to priests and he worked to adapt it to all faithful:

He envisioned a model resting on two pillars:

There is no doubt that we are dealing with a “classic” program of catechesis, as envisaged by the Council of Trent. The originality of de Bus was to make the exposition alive and engaging through dialogue, free interventions and even sacred representations. He did not fail to donate books, rosaries made by himself, small crosses and holy images to arouse commitment and interest. Even though he was criticized and opposed by clergymen close to him, César continued his commitment to the catechism with dedication; he seemed to be “making doctrine” and instead he was collaborating to “build” authentic Christian communities, nourished with the bread of the Word, which the Church breaks for all generations.

Paul VI summarized it well in his homily during the beatification of Father César on April 27, 1975, when he said that it is necessary to:

“promote a catechesis that is accessible, comprehensible and adherent to life” and “accompany the boy or the adult in his slow search for God”.

Father César and his method for catechesis

Father César De Bus organizes the exercise of Christian Doctrine in two cycles: the small doctrine, addressed to those who knew nothing, especially children and the ignorant, who learned the prayers, the sign of the Cross, the commandments and the sacraments through dialogue and memory; and the large doctrine, which while maintaining the concreteness of the language, was done from the pulpit on Sundays and on solemn feasts and consists of a broad and very easy explanation of the Symbol of the Apostles, the Lord’s Prayer, the Commandments, the Precepts of the Church and the Sacraments.

Undoubtedly this is a classic program of catechesis, as envisaged by the Council of Trent. Father César , however, makes the exposition alive and attractive through dialogue, free discussion or through sacred representations.

The Doctrinarian tradition distinguished itself, along the lines of Father César , by the search for a living and “inventive” catechesis, immediate, communicated with simple words, few plastic formulas and easy to remember. Marcel, the first biographer of De Bus, affirms that his way of announcing the Word was very simple and therefore within the reach of everyone. He avoided, as if they were dangerous rocks, sophisticated terms, as well as useless and curious topics, although pleasant to listen to. His catechesis was well structured, balanced, presented with grace and fervor in such a way that not only the simple people but also the educated received satisfaction and profit. His intent was not to make his listeners learned, but believers. Around this scheme, Paul VI affirmed, a preaching steeped in Sacred Scripture is being formed, presented in such a way that the notions learned are translated into a spiritual attitude and a way of acting.

The original catechetical experience of Father César and the Doctrinaires is entrusted to a rich collection of catecheses (for the use of the catechist), divided into 4 or 5 parts (according to the first and third editions of 1666 and 1685), gathered under the title Instructions familières. These are their characteristics of structure and style:

The Instructions familières can be considered a catechetical theology, understood as an elementary and living theology for catechists and a living and stimulating manual of catechetical methodology, imbued with spirituality and rich in pedagogical and didactic ideas.