The life of César De Bus 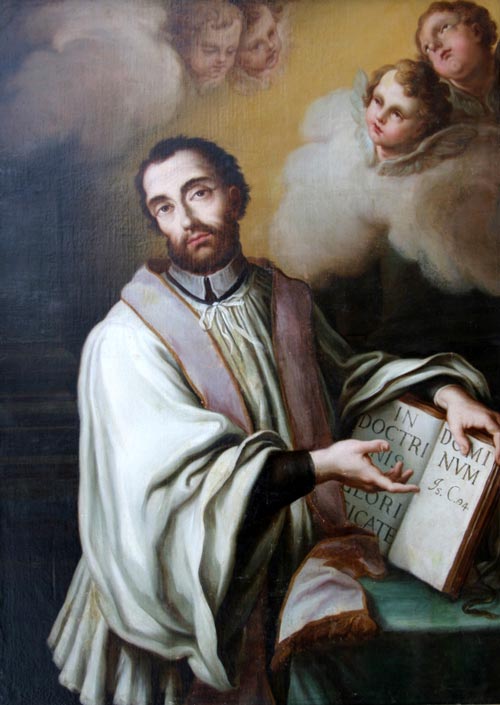 César de Bus, seventh of thirteen children, was born in Cavaillon near Avignon, on February 3, 1544: “it was Sunday, at 9 am”.

He grew up in a family and social environment “naturally” Christian, he went through the troubles of the adolescent crisis that deeply marked his youth and led him to a carefree life made of happy companies and easy entertainment.

The strong call to abandon the path of sin and return to the practice of an authentic Christian faith passed through humble people that the Lord put on his path: Antoinette Reveillade and Louis Guyot. These two people, whom he had met in the De Bus house, implored from God, through prayer and penance, the miracle of his conversion.

One night, before going out with friends for some party, César was touched by some reading from a Saints’ life as requested insistently by Antoinette: he tried to veil his feelings, but, once out, felt the voice of the Christ saying to him, “Are you going to crucify me again?”. Immediately César went back home and spent the night in prayer with Antoinette. Months later, this time in Avignon, yet more and more attracted by the desire of a full conversion, he accepted an invitation to a ball; bore of the same, in the night, he went roaming out through the streets of the city. Close to the wall of a convent, from where the nuns were singing, God waited for the young man to put in his heart a “healthy and holy restlessness”: “What a wretch I am! These nuns get up at night to praise God, while I, at night, go to offend Him.” Grace began to work in him powerfully.

It was the Holy Year 1575. César celebrated his jubilee and returned fully to the Lord under the guidance of the Jesuit Father Péquet; he changed his life, resumed his studies, once interrupted during adolescence, and started his formation for priesthood. Ordained priest in 1582, he became a passionate catechist “of the truths that are the way to heaven” and offered them to his people as “broken bread”, with a simple, immediate, figurative style that could be understood by all.

In the silence of the hermitage of St. Jacques, situated on the hill overlooking Cavaillon, he immersed himself in prolonged prayer and in the study of the catechism “for parish priests”, the fruit of the Council of Trent. From there he traveled to towns and cities in Provence, finally settling in Avignon.

Struck by the catechetical zeal of St. Charles Borromeo, Bishop of Milan, whose work he came to know indirectly, he gathered a group of priests with whom he sketched out a common style of life and shared the fatigue and joy of “doing the exercise of Christian Doctrine”.

Years of fruitful catechetical apostolate followed, but it was also accompanied by many physical and moral sufferings, including the abandonment of his first companions and the progressive blindness that would become total in the last years of his life.

In complete deprivation, on the cross like Jesus, his existence ended on April 15, 1607, Easter Day, in the house of St. Jean le Vieux, in Avignon. It closed, but not forever; it closed for the record, not for the history of the Church, which advances under the guidance of the Spirit.

Impressed by the originality of his catechetical style, Paul VI beatified Father César on April 27 of the Holy Year 1975,

His constant commitment in bringing the Gospel into people’s lives is well summarized in one of his famous expressions: “everything in us must catechise, we must become a living catechism”.